The Culture Of Speech – RETREAT 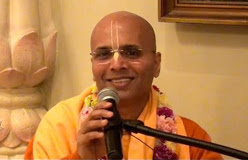 the class will be live on

the class will be live on

HH Bhakti Rasamrita Swami mentioned how he has been witnessing Mayapur Institute from the stage of its inception and how it has grown to a flourishing educational institute that it is today, having a worldwide reputation. Definitely it is a matter of great joy for all of us. Srila Prabhupada must be extremely happy to see so many courses and programs going on and devotees in large numbers coming here every year to study.

“The Srimad Bhagavatam Gifting Chain Project” is a unique idea inspired from the purport by Srila Prabhupada to the first verse of the first chapter of the first canto of the Srimad Bhagavatam, where Srila Prabhupada referring to the Matsya Purana, states that anyone who makes a gift of this great work on a full moon day attains to the highest perfection of life by returning to Godhead. All that the donee has to do, while accepting the gift of the Srimad Bhagavatam, a beautiful set of neat, colourful volumes, is to make a promise to gift a similar set to at least one person. This is how the chain works.

Bhakti Rasamrita Swami began his lecture by talking about the importance of gifting. He emphasized how this human life is a gift which Krsna has given us and the purpose of human life. He spoke elaborately on charity and the various types of charity, being charity in the mode of ignorance, charity in the mode of passion and charity in the mode of goodness. Maharaj then spoke of the transcendental charity viz. the highest charity that one can give, which is giving Krsna to others. He then spoke of the glories of the Srimad Bhagavatam and emphasized that the Srimad Bhagavatam would be the best gift to give someone. Maharaj concluded his lecture with an overview of  The Srimad Bhagavatam Gifting Chain Project and urged all ISKCON temples to adopt this project as an ISKCON project so as to spread the chain of divine knowledge.

Bhakti Rasamrita Swami launched the project by gifting the first Srimad Bhagavatam set in English to Shrimati Arati Vissanji, a leading tax lawyer belonging to one of the leading industrialist families in Mumbai, along with a citation letter signed by Braj Hari Das speaking of the glories of Srimad Bhagavatam and containing the promise made by the recipient to carry the chain forward. Shrimati Vissanji is also a director on the board of Walchandnagar Industries Limited and Vissanji & Sons as well as a trustee of several educational and charitable trusts including the Lady Vissanji School and Foundation. Shrimati Vissanji said she was honoured to receive the first set of Srimad Bhagavatam and pledged to continue the chain.

The program was followed by dinner prasadam at Govinda’s for all the guests.

5 Jun, 2014: An interfaith panel discussion on the topic of “Spiritual Science and Modern Education” was held at the Macquarie University, Sydney on April 29, 2014. The panellists were Bhakti Rasamrita Swami Maharaj who spoke on the topic from the perspective of Gaudiya Vaisnavasim and Mr. Kamal Saleh who spoke in the context of Islam. The panel discussion was attended by several students of the university from various disciplines including law, journalism and liberal arts.

Mr. Kamal Saleh began the session with a brief talk on the various contributions Islam has made to modern education and technological development. Bhakti Rasamrita Swami spoke at length on how spirituality is such an essential ingredient of education and He also spoke of how in ancient times unlike the modern age, spirituality was considered a very much essential part of education and equal emphasis was given to spiritual and material education.

The talk was followed by a lively question answer session in which Bhakti Rasamrita Swami answered several varied questions from students including on what is the process of transmigration of the soul andwhat would be the method to integrate spirituality into the modern education system.

At the end of the panel discussion, all participants were served delicious prasadam from the ISKCON temple in Sydney.

ISKCON Swami Addresses the Save Ganga Movement in Mumbai

17 Oct, 2013: Bhakti Rasamrita Swami addressed the Save Ganga Movement at Bharatiya Vidya Bhavan, Mumbai, India on the occasion of the birth anniversary of Mahatma Gandhi.

The Save Ganga Movement, a leading NGO (non-government organization), a movement organized to preserve all rivers and water bodies in India from various forms of pollution and exploitation, organized a one day panel discussion on “Save Ganga and Save Himalayas” at Bharatiya Vidya Bhavan, Mumbai, India on October 2, 2013 in association with other leading organizations such as the Indian Institute of Technology (IIT) Mumbai, ISKCON, National Women’s Organization, Chinmaya Mission, Bharatiya Vidya Bhavan, Gandhi Smarak Nidhi, Ramamani Iyengar Yoga Institite and the M.C. Mehta Foundation.

Representing ISKCON at the inaugural session of the one-day panel discussion were Bhakti Rasamrita Swami and Sankirtan Das. The panel discussion began with a welcome speech by Smt. Rama Rauta, Convenor of the Save Ganga movement.

Bhakti Rasamrita Swami gave a spiritual perspective on the status of Mother Earth and Mother Ganga while commending the efforts of all the institutions present and the initiative taken by them to increase the awareness about the need to protect and preserve the pure state of the Himalayas and our holy rivers.

Leading journalist, Rahul Dev, spoke on the social issues impacting the efforts to save Ganga.

The concluding remarks for the discussion were given by Swami Tejomayanandji, Head, Worldwide Chinmaya Mission.

The inaugural session was followed by lunch at Govindas, ISKCON, Chowpatty.

Seminar On Universal Brotherhood in Mumbai

6 Dec, 2012: The Mumbai branch of the Gaudiya Mission, the organization founded by Srila Bhaktisiddhanta Saraswati Thakur, organized a two day international seminar on the theme of “Universal Brotherhood as propagated
by Sri Caitanya Mahaprabhu” on December 1st and 2nd , 2012 in Mumbai. The seminar brought together speakers from different faiths and religious practices including members of the Ramakrishna Mission, the Chinmaya Mission as well as practitioners of Sufism and also professors of philosophy from leading universities in India. ISKCON’s Radhanath Swami and Bhakti Rasamrita Swami were invited by the Gaudiya Mission to participate in the seminar.

Radhanath Swami inaugurated the seminar by lighting the lamp in the presence of senior vaisnavas and dignitaries including Bhakti Suhrid Paribrajak Swami President and Acarya of the Gaudiya Mission and B.S. Sanyasi Swami Secretary of the Gaudiya Mission. Radhanath Swami also delivered the inaugural address at the seminar. Speaking on the topic of “Decoding the concept of universal brotherhood and its relevance in today’s world”, he talked about how Sri Caitanya Mahaprabhu had made a garland of the Holy Name and prema bhakti and had ascended in this material world simply to put this garland of His love on every living entity irrespective of caste, creed and gender. Radhanath Swami also spoke of how Srila Bhaktisiddhanta Saraswati Thakur had instructed Srila Prabhupada in their first meeting to spread the message of Lord Caitanya throughout the world and how seriously Srila Prabhupada had taken that instruction and sincerely tried to spread Sri Caitanya Mahaprabhu’s mercy all over the world.

Speaking on the second day of the international seminar on the topic of “Sri Caitanya Mahaprabhu and His relevance in today’s world”, Bhakti Rasamrita Swami spoke of how the divine love given by Sri Caitanya Mahaprabu was the only medicine in today’s troubled times. Bhakti Rasamrita Swami said that Sri Caitanya Mahaprabhu had given the world three important things, one is He established the importance of divine love of Godhead, the second is He gave us the process by which we could achieve that divine love that is by chanting the Holy Names of the Lord, which is an universal process which can be followed by anyone irrespective of caste and creed and, thirdly, He advented personally to demonstrate the process Himself to fallen souls.

Radhanath Swami and Bhakti Rasamrita Swami were also honoured by the President and Acarya of the Gaudiya Mission with mementoes and garlands.